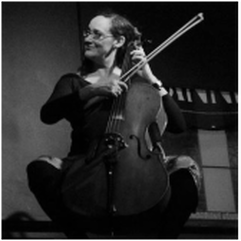 Louise finds enormous joy in making music within the folk and traditional music community as a cellist and very occasional fiddler. She performs with fiddler Jessica Foot in their inventive cross-genre/culture ensemble project Big Fiddle Little Fiddle. She loves any chance to play and collaborate with other musicians, and is currently extending her musical practice under the influence of Scandinavian and Middle Eastern modal music. Louise also occasionally teaches and leads workshops for cellists and fiddlers of all ages with collaborator Jessica Foot.